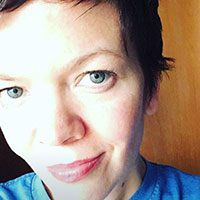 Heidi Klaassen holds a BA in Sociology (Criminology, Deviance and Social Control) and a Certificate in Creative Writing from the University of Calgary. She has work forthcoming in Living Hyphen Magazine’s second issue, Across Generations and the Alexandra Writers’ Centre Society’s Wonder/Shift: 40th Anniversary Anthology. Her work has been featured in The Selkie’s Very Much Alive anthology and Calgary’s The Sprawl. Her personal essay, Been Caught Stealing: Life Inside The Lorraine is a finalist for the 2021 Digital Publishing Awards. Heidi works as the Program Director for the Alexandra Writers’ Centre Society in Calgary, where she hosts the online AWCS ABLit Book Club, celebrating Alberta authors. She is the designer/owner of Hekkal & Hyde and she enjoys posting about the writing life on her Instagram platform. Heidi is currently pursuing her Professional Editing Standards Certificate through Queen’s University. When she is not writing, she enjoys the ever-changing weather of Calgary with her husband, three sons and three rescue chihuahuas.

Calgary author Ali Bryan’s third novel, The Hill, begins with a Departure ceremony – the final goodbye to girls who have reached the age of fifteen and must leave the Hill for the Colony, where they will fulfill new assignments. The Hill is a dystopian community of girls living off the land, in this case, a former landfill on an unnamed island. Think Lord of the Flies meets Lost, with a dash of Hunger Games and Handmaid’s Tale. That said, Bryan’s latest work is crafted in a way that’s fresh and unpredictable. Touted as feminist Young Adult fiction, the novel is mature and comprehensive reading for adults seeking an escape by way of a sociological drama that includes themes on climate change, over-consumption, and patriarchy.

The girls of the Hill arrive young, on boats from the mainland. They are referred to as Smalls and raised by Mothers, older girls are assigned to their care. As they grow, girls are given assignments as Collectors, Hunters and Foragers. The Head Girl oversees not only their work, but the safety and secrecy of the Hill itself. The Manual, a volume describing everything from self-defence through Ju-Jitsu to the various forms of edibles and poisons on the island, documents procedures for governance, survival and rules such as the restriction of patriarchal language and areas of the island that are forbidden. “Section 5.5 – Girls must protect the Hill or die trying. The Colony applauds your sacrifice” is one example of the words that guide the female-only population.

Told from the perspective of Wren, the newly appointed Head Girl, the narrative drops eerie bread crumbs along its path, like outgoing Head Girl Beck’s ominous warning, “there have been sightings…be vigilant” and reference to a bedtime story told to the Smalls about the disappearance of Tora, Arrival #97. Wren struggles to be a good leader, to follow the directives of The Manual while navigating questions about the Hill, the Colony, and the truth – something that changes with every new discovery on the island. Bryan’s first-person prose is seamless, a reminder of how adolescence can be filled with confidence and self-assurance one moment, fear and helplessness the next. Wren’s view of her limited world is both dreamy and bleak, picturing life on the mainland “like imagining life on a star.” The reader is pulled into the dynamics of the island, the push and pull of nature and its reflection in the behaviour of the humans bound by its limitations. Wren’s struggles to cope with responsibility for the other girls and adjusting to a changing reality are themes that will resonate with both younger and mature adult readers.

Bryan’s story is an adrenaline-filled adventure, the pace at times frantic. Survival on the garbage heap that is the Hill seems like a futuristic nightmare, a distant dream. The characters are gritty and real, their faults and flaws so very human. Set in the near-future, the reasoning behind this secret dominion of girls is an idea that will stick with you, like a warning.