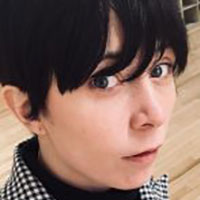 Couri Johnson is a PhD student at the University of Louisiana, a former angry punk, and a fiction writer herself. She has a forthcoming book of fabulist fiction coming out with Bridge Eight Press in Spring of 2020, and is currently working on her second collection of fabulist stories.

Once upon the 1990s, Beth Lisick’s gritty, party-croaking narrator, Edie, was at the center of San Francisco’s artsy-weirdo-punk-party scene for no other reason than simply existing in that space, serving drinks, and understanding all the right references. The novel opens there, at the peak of her success, being photographed as the scene’s It-Girl. But this isn’t the Edie we stay with. Edie on the Green Screen unfolds thirteen years later in 2011; the city has changed, the scene has changed, and while Edie has stood still all these years, living in the same warehouse, working at the same bar, and maintaining the same invulnerable sarcasm that served her so well during her hey-day, she’s also changing. The novel follows Edie as her mother’s death wakes her to the harsh reality that the world has moved on from the 1990s, and that she, in her stationary haze inside low-lit bars and behind her protective, performative armor of sarcasm, has been left behind as well.

Lisick crafts a narrative that is both sentimental and gritty, walking a perfect balance between the two largely thanks to Edie’s narrative voice. Fluctuating between being raw and vulnerable, distant and crass, Edie is saddled with contemporary American anxieties that are all too common; disconnection, imposter syndrome, bitter sweet and sometimes resentful nostalgia, all while having to navigate a long dark path towards an unstable and unknowable future in a society that feels like it’s always five steps ahead. Rather than force feed its audience cheap platitudes or pretend there are easy answers, or really any answers at all, to the questions that face Edie and the modern generation of adult-somethings, Lisick allows for uncertainty, regression, and confusion in a way that is refreshingly real, humorous, and even tender.

One of the most tender ways in which this narrative is rendered is its display of time and space. Lisick paints San Fancisco’s art and music scene with bittersweet precision and affection while unflinchingly acknowledging its darker undersides and the self-aggrandizing performance of its participants. Its warts are rendered affectionately, but they’re warts none-the-less. Both the suburbs of San Jose and the city streets of San Francisco are treated with alternating feelings of love, rose-colored by the soft lenses of nostalgia, and betrayal at the way time has snuck in and changed them, leaving Edie alone and displaced both physically and internally. Out of all the relationships Edie has throughout the novel, it’s her relationship to Sunnyvale and San Francisco that perhaps matter the most.

For readers looking for simple ends and simple feelings, clear cut progression and clean character growth, this novel will likely be a frustration. This is a novel of no easy answers, and its thematic elements are looping, layered, and complex. Relationships begin and end abruptly. Potential avenues are picked up, examined, and then cast aside. One moment Edie is making strides into adjusting to a new way of living; learning how to craft a resume, seeking out gainful employment, and buying normie blouses at the suburban mall, and the next she is post-verbal from pot brownies in a locked-down bar in San Francisco while across the street a fire blazes a building down. Edie is, objectively, a failure; a bartender that mostly doesn’t like people; a part of an art scene without being an artist; a sister that can’t communicate with her brother; a daughter who knows nothing more about her mother beyond the surface level details of a life left mostly unexamined; a driver without a license; a party girl who can’t handle her marijuana; a temporary frontwoman in a band who can’t sing; a philosopher of temporary epiphanies; a lover in the midst of a half-a-decade dry spell; a middle-aged woman experiencing a second adolescence, submerged in a pool of grief and displacement in a world she no longer understands. And it is for precisely these reasons that many readers will come to love her; Edie and her failures are all incredibly human, poignantly current, and real in their contradictory banality and complexity. During one of her more tender tangents, Edie articulates her feelings about clowns, saying she believes clowns are performing a service to society. That “whether they were funny or stupid or grotesque or sad or scary, their job was to be a spectacle for you to project your emotions onto.” In many ways Edie functions in the same way for the reader. She fluctuates between funny, stupid, sad, scary, grotesque, acidic, and sweet, and she’s just open enough for the reader to project themselves onto her; for the reader to see in her multitude of repeating surfaces a reflection of everything they have and haven’t been, and all the frustrations that come along with a life that’s stalled and dwindling. In the moments we see Edie lay down her sarcastic armor, we see ourselves naked and exposed. And in the moments when we see Edie inevitably put the armor back on, we see all the ways in which we are hiding.