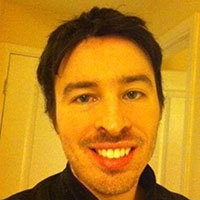 Joel Schueler’s work appears in over ten countries in over fifty publications including Pennsylvania Literary Journal, London Poetry Magazine & The Brasilia Review. From London, he has a BA(Hons) in English Literature & Creative Writing from the University of Wales, Aberystwyth.

Expecting others to read our work is no privilege to be taken lightly. We serve to captivate those that have chosen to cast their eyes upon our pages. Turning away from the baby, the job, the TV program, the chore, what have you. It is our especial duty to fill in for those that become lost in emptiness, serving up entertainable pleasure in the bits between their busy lives. (Yes, I did just use serve and serving in the same paragraph. Ger over it.)

Remember how people wanted to get away from the formulaic and the traditional, from the iambic pentameter bastards of the past, that verse could be free? No, I don’t either. Free verse is far from free. Regarding its elemental framework, if we are not careful, it will become a formula of itself: a consistently objective description of a landscape, animal or plant; a fumbling around grandad’s attic to find something of supposed value; the view out some poncy restaurant; or not to mention the poem with tidily formed stanzas each with the same number of lines. And if I see someone mention egrets again…

If it is affected poetry you want, it seems it has to be really affected, like an emotional fleeing from a war-torn village or a family member passing on. A poem often appears to have to be categorized as either rhyming or nonrhyming—the two seemingly disallowed from mixing, certainly by any large degree within a poem. Only the odd, brave journal would take on such a poem, and braver still would take on a poem full of rhyme.

It looks like for some of the funky, modern, populist journals that it is perfectly acceptable to omit definite and indefinite articles, and capitals after full stops. Granted, here I may not be going by any great book, not like In the Line of Battle by Walter Wood, but in my book at least, this isn’t freedom of expression, this is just fucking lazy. Believe it or not, sometimes an or the is needed to make the line make sense, even though it is poetry. This is modern laziness the way we try to shorten words and use pathetic acronyms like YOLO. It is not that the articles are not needed—you have to stop-start what you are reading to process the line that has lost its flow, making it sound like someone has failed to grasp the English language or is writing in pidgin English. If that is the way a poet wants to go then fine. I am all for modernizing and reforming poetry and for freedom of expression, but this particular style when implemented without attention to flow and/or without any discernible purpose other than to look new I believe is not a cause worth fighting for.

Another worrying development on the poetry scene is an obsequious clique of poets back-patting high-end literary journal editors, calling them geniuses on Twitter. Some journals choose not to read manuscripts blindly to upkeep the clique to some extent. I see you.

And on another note, I am starting to agree with psychologists who say should is one of the unhealthiest words you can use. You hear all this crap about what you should do as a writer of fiction, how you should get readers emotionally invested in your characters. It’s like, no I fucking shouldn’t. You should go and get professional help if you are getting emotionally invested in fictional characters. I wonder if those that force down show over tell upon others have ever read Nineteen Eighty-Four?

As a writer, being productive with your time is a double-edged sword. As you improve with practice, hurry! Your brain is shrinking with time! Since I cannot acquire the Japanese sweet potato, I eat blackcurrant and blueberry products for their anthocyanins.

On a personal note, to journey far and wide in free verse is what interests me. I do not discount the possibility that I may be tempted in future, and I do not fail to appreciate such a poem, but I have no ambition to write a sonnet, sestina, haiku, or another formulated stanzaic form. That is not to say a sense of imagism or constrained, formal or metrical elements will never be apparent within one of my poems, but I want the freedom to choose how many such devices, if any, to use. By the time I have finished editing, I realize I have hated my work enough to let it go.