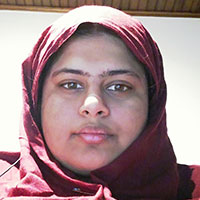 Hibah Shabkhez is a writer of the half-yo literary tradition, an erratic language-learning enthusiast, a teacher of French as a foreign language and a happily eccentric blogger from Lahore, Pakistan. Her work has previously appeared in Black Bough, Protean, Ideate, Songs of Eretz, Sparks of Calliope, The Dawntreader and a number of other literary magazines. Studying life, languages and literature from a comparative perspective across linguistic and cultural boundaries holds a particular fascination for her.

The best writing advice I have ever received came from a lunch break discussion with a girl from the Maldives I met during a student exchange programme. Our conversation, which had begun with a ‘may I see your book’, had drifted from literature to food. I was trying to describe Pakistani cuisine to her, and failing miserably.

“Exactly what is this Pakistani mixed-rice dish?”

“It’s a – it’s this thing with chicken and rice and spices. We call it biryani.”

“Oh, biryani! Why didn’t you just say that?”

“Because it’s not an English word and I wasn’t sure you would understand it.”

“And the ‘unleavened flatbread’ thing you were talking about earlier?”

“Well, I don’t know what that is, but – hold on,” she unlocked her phone, typed ‘roti Pakistan’, and opened the first image in the results. “Is this it?”

“We eat bread like this too, you know. We call it roshi.”

After that I began to call the dishes by their real, Urdu and Punjabi names. As the conversation began to flow, she started to talk about her country’s recipes too: garudhiya and mas huni, rihaakuru and bajiya and bis Keemiya … whenever we got really stuck, we googled the words: but it was more fun to first taste the sound of each name and imagine many possible scents, colours and textures. By the time our lunch break ended, we were laughing in ecstasy over the memory of gulab jamans, the deliciousness of which had been one of the chief delights of both our childhoods.

“It’s a pity we can’t write poems like this,” I said. “In all of our languages all at once.”

“Maybe not exactly like this, no. But there are some things that simply can’t be said in English, and they shouldn’t have to be, even if it IS the only language we know well enough to write in.”

“Most readers won’t understand them if they aren’t in English, so that’s not – fair.”

“It’s a lot less unfair than ‘mixed-rice dish’,” she retorted “and most readers can google new words, or ask a friend, or go to the library. They’re not complete idiots, you know. And you must stop apologizing all the time for your world being different.”

“Isn’t it? Okay. But, you know, it’s all the stuff that isn’t – like, English or American or something, the stuff you didn’t just absorb from a book, that really matters. You can love their literature and read it all your life, but you have to stop trying to be them. That’s the only way you’ll find out what you need to be writing.”

“I’m not – ” I protested, but she had gone inside her classroom, and I headed back to mine mentally sputtering indignant ripostes.

It wasn’t until a week later that I finally admitted defeat and began to scour the mixed-rice dishes and unleavened flatbreads out of my poems. The journey from “I don’t do that!” to “what the pickled fish is wrong with me?” to “I’ll write the actual words but then add footnotes” to “I suck at this, I’ll never write again” to “okay, this is something I need to watch out for when I write” was a long and tough one.

One thought on “Unleavened Flatbread”