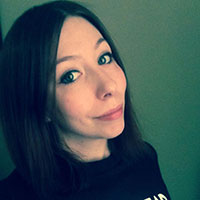 Emma Murray is a writer from Austin, Texas, currently writing full time while she stays home with her daughter. Her short fiction has appeared in The Broadkill Review as well as Children, Churches, and Daddies Magazine.

The electric guitar, distortion turned all the way up, wailed so loudly you couldn’t hear each other, even if you shouted. Most people didn’t mind because they were there to see the band, but I couldn’t hear what Summer was saying and the frivolous remarks about how much fun she was having would have been sweeter music to my ears.

She turned to me, her open-mouth smile pushing up her apple cheeks, eyes glassy from the ecstasy, and her lips moved but I couldn’t understand a word. I cupped my hand around my ear and shrugged. She yelled again. I shook my head, so she gave up and turned back to the stage.

Hot, dancing bodies pushed against me on all sides as we stood in the middle of the crowd. It was too small of a room to host such a packed concert, but the venue probably hadn’t expected so many people for some unknown college band. They’d underestimated the social media influence of popular boys with handsome smirks and smoldering eyes. Looking around, almost the entire crowd consisted of girls just like Summer and I: young and trying to live in the moment.

The lead singer took a break from his screaming to let the bassist play a solo, and it became just quiet enough for me to yell into Summer’s ear, “Pretty good.”

“What? You mean the best band ever, right?” she yelled back, her lips just brushing my earlobe and her breath giving me goose bumps. As she pulled away, she winked. The song picked up again and she swayed along to the rhythm. I watched her tousle her long blonde hair while the other hand rose up above the crowd in an effortless, graceful motion.

I knew I had to tell her tonight. It wasn’t the plan, but watching her glow like an angel, her dewy skin shimmering in the blue light from the stage, I couldn’t wait any longer, and her chemical state of indiscriminate love might make her more receptive to the possibility of becoming more than friends.

My heart pounded in my ears, drowning out the music, and I felt a mixture of nausea and nervous butterflies sloshing in my stomach.  Needing some liquid courage, I tapped Summer’s shoulder and gestured toward the bar, but she only flashed a smile then returned to her musical trance.

The crowd was dense with gyrating forms as I fought through a sea of slick arms and damp clothing. They moved as one being and I had to push and elbow to stop my motion backward before I could even attempt to pull myself through to the bar counter.

Bodies crashed like waves against me even there, bruising my ribs against the rounded edge. Only a few of us were ordering anything, the rest of the crowd was just displaced as they expanded to every corner of the room. I pointed to a beer and paid.

Cracking it open, I was surprised I couldn’t even hear the familiar hiss as it bubbled up and foam dripped down my hand. I turned to give the bartender a scowl for the obviously shaken can, but he was already helping someone else, so I just wiped off the froth with the edge of my flannel shirt and took a deep swig.

A couple standing nearby pushed against me, causing me to spill a good portion of my beer. I cursed and I pushed back, but their glassy eyes and plastic smiles don’t register anything beyond the general swaying of the crowd.

On tiptoes, I craned my neck, trying to make out Summer. Scanning back and forth over the ocean of heads and arms I didn’t see her, but then the sea parted and that gold crown appeared, taking my breath away. Tonight had to be the night.

In three large gulps, I finished the beer, crushed the can, and set it back on the countertop. I tried to take out my phone to check my lipstick, but a group of three girls stumbled into me, and it fell to the floor. They mouthed apologies as I bent over the facedown phone.  I held my breath, turning it over and revealing the still intact screen.  As I let out a sigh and started to stand up, a knee hit me square in the face.

“Hey!” I shouted and rubbed my nose, checking for blood. Standing up quickly, I looked for the knee’s owner, but instead a spark in the top corner of the stage caught my eye. The small flickers fell from the wires and sparkled on their way before landing on the soundproof insulation and curtains backing the stage. Immediately, they grew from sparks to small flames, consuming and growing larger by the second.

“Oh my god! Fire! Fire!” I screamed. I pointed and cried out, but it took too many precious seconds for anyone to turn their glazed eyes and take in the glow of the flames, for the band to notice and stop playing, for the smoke alarm to detect the rapidly growing cloud of smoke and sound its screeching call into the suddenly eerily quiet room full of confused eyes and hushed whispers.

Then, all at once, a cacophony of terror rose from the crowd and the many individuals became one again, a beast with a thousand hands and rolling eyes clawing its way out of the growing inferno.

At first, I tried to hold my ground to wait for Summer, grabbing the bar counter, but the sea of bodies crashed in waves against me, almost knocking me from my feet. In the darting, unseeing eyes of the intoxicated faces, I could see the desperation, and as the thick black smoke began to smother us, I knew I had to go with the crowd if I wanted to survive.

The panting stink of breaths around me, interrupted by sputters and coughs, was as hot and suffocating as the smoke, so I brought up my arm to breathe through the sleeve of my shirt as we all pressed forward, inching toward the doors. I kept looking back, trying to find Summer. Part of me hoped not to find her, hoping she had gone through the back exit reserved for the band, already safe outside in the fresh winter air.

From all sides, bodies pressed against me, pushing the air from my lungs as I struggled to inhale anything, even the black smoke. We were nearing the doors when the crowd ahead stopped. Panic and bile rose in my throat as those behind us pressed into me, attempting to push through the bodies that blocked their way to freedom. I tried to breathe and my chest couldn’t expand. My ribs threatened to break with stabbing little cracks as the vise of flesh tightened.

The pressure and smoke started to take their toll and my vision shrank to a pinpoint while my lungs still fought to open. Then came a shriek a few paces in front of me and we were moving again. I gasped and staggered. As we stampeded forward like cattle, I was treading on something soft but I couldn’t bear to look down.

My own eyes glazed with blind fear and I was a part of the terrible beast that cried and moaned and couldn’t afford to stop or pity the fallen. The door was only a few dozen heads in front of me now, and I joined the push, getting closer and closer until I popped out and fell on my knees into snow dirtied by a hundred desperate bodies pushing free.

More bodies fell on top of me. I knew I had to scramble to my feet and get just far enough to where we became people again, not frightened creatures. A few feet from the entrance, I turned to look for Summer, but my legs were weak and I collapsed to a kneel facing the door. Greedily, I pulled as much of the dark, cold night air into my lungs as possible and then my mind turned back on and I registered the disaster happening in front of me.

My lip quivered and tears ran down my cheeks as I witnessed the pileup of bodies, girls like me but with wild, pleading eyes, stacked on top of each other as they flailed and fought to get free. Stuck, coughing, crying, and clawing, their voices yelped like small animals between calls for help.

Some of us ran to them, offering our hands and pulling with all our strength as our heels dug into the ice and snow, but for each victim we freed, another immediately appeared, wedging themselves between the others and fighting for the winter air.

I was still pulling on desperate arms and choking on the billowing black smoke that poured out from behind them when the firefighters arrived. They were firm but gentle, pushing us away so they could take over, and I walked in a daze to a snow bank where I sat and shivered, waiting for Summer.

A paramedic soon found me and treated me, telling me things about hypothermia and shock and smoke inhalation, but I kept my eyes on the door, now full of nothing but flames even as the torrents of water from fire hoses tried to put them out.

I wanted to tell Summer so many things. How I loved the way she wrinkled her nose up like a rabbit when she laughed. How I treasured all the nights we had texted back and forth until dawn, talking about school, friends, our futures. How I would never forget that time she sat for three hours, arms wrapped around me, while I cried under the bleachers when my father died. How I’d fallen in love with her slowly and all at once. But I’ll never get to tell her.

I didn’t go to the funeral. I couldn’t. And two months later, when a friend told me in a hushed voice that the autopsies were finally all done and the details available to be viewed, hoping to give me closure, I refused to read it. I didn’t want to know just what happened to the girl with the soft downy arms and apple cheeks.

Sometimes I’d say that I wished I’d been trapped back there with her, but it’s just a lie I like to tell myself. I was a part of that mindless beast, pressing blindly toward the air and life. I wanted to survive more than anything and I’ll always have to live with that.