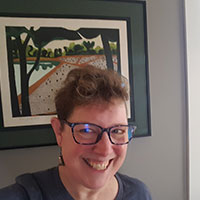 Phebe Jewell’s most recent work appears or is forthcoming in “Dime Show Review,” “Nunum,” “MoonPark Review,” “Sky Island Journal,” “The Airgonaut,” and other publications. A teacher at Seattle Central College, she also volunteers for the Freedom Project Puget Sound, a nonprofit providing college courses for women in prison.

A good family is hard to find, Lloyd tells himself as he stands at Macy’s wallet counter.

Surveying the selection of leather and suede cases fanned out in front of him, Lloyd shakes his head. Wallets used to have inserts with pictures of nice people. He imagined the insert people were his family. A billfold, they called them, because you folded up your bills in a compact square you could slip in a back pocket. He was never alone, so long as he carried them with him, safe in plastic sheaths.

Lloyd couldn’t remember how many wallet families he made since leaving his first home. The house where he was beaten for repeating messages the walls told him. Where he learned not to share the voices in his head.

He picks up a kid’s wallet sporting stenciled cowboy hats and boots. The worst part of getting mugged wasn’t getting jumped from behind or the stolen nine dollars. It was losing his favorite family.

He’ll miss Jimmy the most. Goofy-as-shit brother. That sly smirk in the photo, daring Lloyd to find the rubber snake in his bed, the molded plastic dog turd under the kitchen table. What a knucklehead. Jimmy gave him plenty of laughs.

And baby sister Angie. In her picture she smiles at the photographer, confident and happy. Lloyd was her favorite, spinning elaborate tales of warrior princesses battling bloodthirsty ogres when she couldn’t sleep.

Even in a formal suit and tie, Dad’s picture calmed him down. A quick glance at that open face whenever the spiders moved under his skin, or someone wanted to hurt him, and Lloyd could breathe. Last week when an angry man on the bus yelled “fuck you” and glared at him for five long blocks, Lloyd took out his wallet and studied each picture, one by one. Inhale. Exhale.

When the detective took his statement, Lloyd could tell the cop didn’t really understand that his family had disappeared with the wallet. Lloyd imagined them tossed in a dumpster downtown, faces pressed against slippery rotting spinach. Maybe they had already arrived in a landfill and suffocated under moldy mattresses and broken lawnmowers. He would never see them again. They would wonder why he had left them, where he had gone.

How many families has he lost? Did he deserve a family if he couldn’t keep them safe?

“Sir?” the clerk clears his throat. “Do any of these look good to you?”

Lloyd sets the cowboy wallet on the counter. “Where are the wallets with inserts? You know, with people’s pictures?”

The clerk stares as if Lloyd asked for a diamond-studded moneyclip.

The door glides open. People push past him on the crowded sidewalk. Maybe it’s for the best. It’s always hard to get used to a new family.

One thought on “Insert Family”