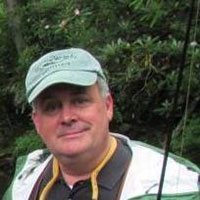 Niles Reddick is an author of a novel, two collections, and a novella. His work has been featured in twenty-two anthologies, twenty-one countries, and in over four hundred publications including The Saturday Evening Post, PIF, BlazeVox, New Reader Magazine, Citron Review, and The Boston Literary Magazine.

When a neighbor called Bailey to let him know some teenager speeding by had hit their cat, Bailey went and scooped him up in a pillowcase and dug a shallow grave in the backyard by the Dogwood tree. The white flowers on the tree matched the cat’s fur, and Bailey and his wife Becky buried the cat, told stories they had experienced through the years, and Bailey swore to his wife Becky they wouldn’t have another one, that it was just too sad when pets died. She agreed, but when they were watching an episode of Everybody Loves Raymond, the one where Frank and Marie get kicked out of their condo community, they heard scratching and purring at the front door.

Bailey and Becky looked at each other. It seemed a bit eerie to them. “What the hell?” he said.

Bailey turned on the front porch light and opened the wooden door. Cotton the cat ran straight into the kitchen to his bowl, which had not been cleaned and moved when they’d buried the cat earlier. “That nine lives shit must be true,” he said.

“Don’t be silly,” she said. “A cat might land on its feet from a fall out of a tree, but that doesn’t mean it rose from the grave, but if we go out there and that cat has dug himself out, we’re changing the name to Jesus.”

“I’m going to check,” Bailey said and ran out the door. When he came back, he told her, “Well, we may need to change its name.”

“You are kidding me.”

“Yes, I am,” he laughed, and Becky swatted at him.

“Well, whose cat do you think we buried?”

“You really think cats have nine lives?” he asked.

He nodded and thought how many close calls he had through the years: having the wreck on his bike in traffic and a car running over his bike, narrowly missing him, falling off the tailgate of the moving truck, suffering with the Swine flu that landed him in the hospital, having knee replacement surgery from a football injury when they couldn’t wake him from anesthesia, having the car wreck when the seatbelt and airbag kept him safe, cutting his artery from the tree trimmer that slipped from his hand and fell back on his neck, and finally, his tripping and falling down the stairs at work that left him unconscious. He counted them and said, “Well, I’ve got a couple left.”

“Nothing,” he said. “I’ve got a headache from all this excitement. I’m going to lay down a bit.”

“Thanks”, he swallowed with a gulp of water.

Bailey laid on the bed, pushed his arm under the cool, white pillow in its case. He didn’t know his nine lives were up because he didn’t recall or count the time the chord that wrapped around his neck when he was in his mother’s womb and how she felt odd and did some exercise that created a wave in the fluid that pushed it back in place, and he didn’t recall the time he stopped breathing in his crib and his mom wanted to check on him one more time and startled and shook him back into breathing. The aneurysm didn’t take long to end Bailey’s life, and Becky thought he was sleeping when she came to bed after The Late Show. Cotton, though, stood at the door of their bedroom, scratched, and purred, and Becky got up, stumbled to the door, and shooed the cat away. “I might kill that cat myself if he doesn’t stop,” she whispered on the way to bed.