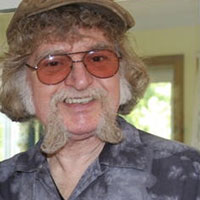 Don Robishaw’s collection of five FF tales found in, ‘Bad Road Ahead’ was the Grand Winner in Defenestrationism, 2020 Flash Fiction Suite Contest. Don’s short story entitled, ’Bad Paper Odyssey’ was a semi-finalist in Digging Through the Fat 2018 Chapbook Contest. His work has also recently appeared in Drunk Monkeys, Literary Orphans, Crack-the-Spine, FFM, O’Dark Thirty, among other venues. Many of the characters he developed have been homeless, served for periods of time in the military, or are based upon archetypes or stereotypes he’s met while on the road. He likes to write poetry, satire, tragedies, and gritty fictional tales — of men and women from various backgrounds — that may have sprouted from a seed, from his past. Before he stopped working to write, he ran educational programs for homeless shelters. Don’s also well-traveled, using various ways and means: Sailor, Peace Corps Volunteer, bartender, hitchhiker, world traveler, college professor, and circus roustabout.

Bar-rag in hand at the Lonely Hearts, I stare out a plate-glass window. In the mist below the mid-night-blue neon sign over wet concrete stands a boy with thumbs tucked into tight-white slacks. I call him, El Diablo Rojo.

Dancing towards an old-fashioned gaslight he sings show tunes, as I dwell upon good times, before my unofficial adopted parents disowned me. Late night visitors on our fire escape. Hips swayed as I danced and sang Boney M’s, Brown Girls in the Ring. Used to morph into ‘West Side Story’ around midnight.

Years earlier mom dreamed to make it big in America, when she crooned in the resort towns in Mexico.

Sometimes, you just know before you know. Felt pain going downstairs with laundry that morning. Never had back pains before or ever again. My dreams vanished in a factory fire. Alone, no papers, a story for another time.

El Diablo’s John Ryan, US Coast Guard. I look out the window. Our eyes meet. Rats. A record-company dude drifts from the backroom into the sixty-foot front bar, diverting attention from my fantasies.

He’s a regular. Sooner or later they hear I’m a good singer. Other girls know ‘em. Until I learn something about a guy, call ‘em all buddy. Twirls his handlebar mustache, “Play ya for a drink, princess,” tossing his personal cue stick back and forth. Buddy knows the game.

Call me princess one more time.

Receding hairline, sideburns, and black shades. Never trusted checkerboard-suit and bow-tie-kinda guys. Girls tell me he’ll promise a contract if you go to his place. Not prince charming, but connected. I don’t need to be charmed. Maybe back in the day.

Black belt in karate, can handle myself. “Eight ball, you rack em.”

“Heard you the other night. You’re talented. I envision Carnegie Hall. Win, got a contract at my place.”

“Carnegie Hall? Do I have to wait for the ink to dry?”

We enter the smokey low-ceiling backroom — four pool tables, small bar, and a piano. I say, “Ten on the side?”

The Piano Man’s rapping and banging a Steinway Stand-up, Tom Waits, The Piano Has Been Drinking.

“Charlie, borrow me a sawbuck, son.” The more skin in the game, the better I shoot.

He downs a shot of Black Jack. In a raspy voice he raps, “Princess, you’re in like Flynn for a double-fin. Let the games begin.” Old Charlie always calls me princess; doesn’t know Garcia means warrior in Spanish. I’ll always be Old Charlie’s princess, but for everyone else I’m known as, The Warrior Princess.

Fluorescent light flickers, grab a bulb and my stick from the closet, shed heels, and slide onto the table. Not an easy task wearing a mini-skirt.

Neighborhood friends give me a hard time as I struggle to replace the bulb. Christ sake Wanda, stick the pins in the holes and turn. Everyone claps.

I’m on the table. El Diablo enters the backroom bringing with him a sea of smells that linger in the air — red hair wet, dripping, and sexy. Oo di, I like this bad boy’s look. He’s got my attention.

Slip off the table real slow-like, slide out the mother-of-pearl inlaid cue and screw two pieces together, rub tip, and reach for the chalk while we share glances. I want him. I know he wants me, too.

Buddy’s up. Runs the yellow 1, blue 2, and red 3. Four balls left and they’re in my way. I have to make the black 8. Fuggedaboutit. Can’t see a clear shot.

El Diablo’s checking me out on every shot. For him I call, “Three banks, 8 off the 4 into the side-pocket, combination.” Point to each ball with my stick and the route the cue ball will travel. Thirty people scream and make wild side bets. Friends also have skin in the game. I blow twice on the tip, chalk up, and bend real low.

The crowd roars. White ball rolls over green felt and off the bank, misses his ball by a hair, continues off the side bank, slows to a crawl, and off the third bank. Cue ball taps purple 4. It rolls, enough speed, and taps the black 8. It clatters down the rabbit hole.

Buddy’s pissed-off. People scream and echo each other, “Fugouttahea, gimme a break, I don’t believe my own eyes!”

Buddy stomps his foot. When that doesn’t shake the cue ball, he blows on it. “You hustled me, you illegal bitch.” Buddy refuses to pay up and slaps my butt.

I spin, place both hands on Buddy’s shoulders and bring my knee to his groin before El Diablo gets a chance. He reaches into Buddy’s top pocket and pulls out my ten.

Sailor-boy drapes his arm around my shoulder. I don’t like strangers touching me. It’s okay though, when that arm belongs to El Diablo.

Two City Blues and an ICE Agent enter. Shit! A hand slides to my bare back, as the sailor steers me towards the rear exit.

He whispers, “La Princesa, we don’t need his damn contract.” And at that moment sings, Van Morrison’s Brown-Eyed-Girl. And for a moment I allow a curly haired sailor-boy to think he’s Prince Charming.

On a misty night in a Brooklyn alley I roll down a taxi window and say, “Jonny, got dreams to chase, opportunities to seek out, and I do, need those damn contracts to sign.” And I kiss a seventeen year old boy, the one in the plate-glass window, good night.