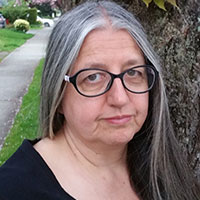 Isabella Mori lives in Vancouver and is the author of two books of and about poetry, A bagful of haiku – 87 imperfections, and isabella mori’s teatable book. She won the 2018 Cecilia Lamont prize for poetry and is currently enrolled in Simon Fraser University’s The Writers Studio. Mori also writes short stories, novels, and non-fiction, and was a translation contributor (from English to German) in Reading Canada, a profile of Canada’s diverse literature commissioned for the 2017 Frankfurt Book Fair. She has a Masters Degree in Education, works in the mental health/addiction field and is currently working on a book that combines creative fiction, interviews and research on the topics of mental health and addiction.

“Your head is a dangerous neighbourhood. Don’t go there by yourself!” That’s an old saying in 12-step groups. But would you say that to a writer? We writers practically live in our heads. Of course we go there by ourselves!

Except that I, and many, many writers with me, have found that always and only going there by myself can indeed be dangerous. Or at the very least, very lonely. And I’m not only talking emotionally lonely but also lonely as a writer. Without someone else’s input, it’s much harder for our writing to get better. We can’t be our one and only critic and advisor. Ten eyes see more than two.

There are probably some writers who sit all by themselves with nothing but their laptop or pen and paper and never discuss their writing with anyone until they talk to their editor. However, most writers who have had at least a modicum of success have people who they can invite into their heads, people who can look at all the weird and wonderful jumble in there and ask things like, “Does Mary just jump on the horse? Wouldn’t she need to saddle it first?” or “Do you think that losing ten dollars is enough to drive someone to suicide?” These same people will also marvel over how they wanted to slip into their own pyjamas because you described so well how soft and warm and cozy they felt. They will tell you that reading about your Dean Martin made them literally hear the ice clink in his glass and that your meadow brought them to tears because it made them think of the lilies their grandmother used to grow.

And talking about growing – I can’t grow on my own. Despite the fact that I’m an introvert and blessed/cursed with a ridiculous sense of independence, I need the sun, wind, rain and soil of readers and writers.

All my big jumps in writing came from community.

My first real writing boost came when I worked at a non-profit in Paraguay and my boss discovered that I could put sentences together. “Why don’t you write a few articles for our newsletter?” he said. A year and a half later, I wrote the newsletter almost all by myself and had started a magazine. I have used my writing skills in many of my jobs since then – but that would never have happened without the conversations, encouragements and corrections from my boss.

However, I didn’t have the guts to call myself a writer for many years. That only came – well, with a group. I was lucky enough to be one of the participants in the now somewhat legendary SEARCH group, a federally-funded program in Vancouver that helped creatives find their way in the business side of the art world. I will never forget standing in front of my eleven co-SEARCHers and saying, “I’m Isabella, and I’m a writer.” We cheered and egged each other on, exchanged both wonderfully wacky and amazingly practical ideas with each other and are part of a large group of SEARCH alumni that support each other to this day. A year later I published my first book.

Then there are official writing groups. I’ve been part of eight so far. Most of those groups I found through people I knew face to face or online. My haiku group, for example, I found because I had been idly going through the #haiku hashtag on Twitter, which led me to Michael Dylan Welch (@CaptainHaiku), one of the best-known North American experts on the matter. He told me about our local group and suggested I join.

Here are examples of what I’ve gained:

Are all writing groups sheer perfection and bliss? Of course not. Things can go awry. I’ve inadvertently hurt fellow writers’ feelings, or have annoyed them with a less-than-thorough critique. On occasion, I’ve secretly rolled my eyes at comments from people who didn’t understand my genre. I’m not a big fan of quibbling at length over things like Oxford commas, and I get antsy when people go off on wild tangents – or, more precisely and honestly, on tangents I’m not interested in. Sometimes I get bored by someone’s stories, or judgmental me wishes they would start getting a little less sloppy in their editing.

As with other groups – and relationships in general – it’s a good idea to ask yourself what you’re looking for. For example, I’ve found that when I’m very early in a project, I feel too fragile to have it critiqued. So I won’t bring it to a group that focuses on critiquing. Another example is that a group that spends a lot of time socializing and not so much focusing on writing wouldn’t work for me. But those are just my idiosyncrasies. If you’re thinking of joining a group, define what you’re looking for. Is it support? Simply being around other writers? Some groups occasionally have guest speakers or workshops – would that interest you? Do you think you would benefit from intense critiquing and editing of each others’ work? Is there a particular area in your writing that you’d like to grow in – say, grammar, plotting, voice, character development? Write your wish list and go find a group that comes as close as possible to what you need. If you’re on Twitter or Facebook, ask around. On Twitter, the hashtags #amwriting and #WritingCommunity are quite helpful.

All in all though, my experience with groups has been invaluable. Proof? You wouldn’t be reading this without them. At one of our writing groups, we announce our writing goals at the beginning of the year. One of mine was to organize a few “submission parties.” So a few times, some writers from our group got together for two hours and submitted at least one piece for publication, or wrote a query letter. That got me into the swing of submitting my work, one of which was “Circling Around Writing” here at Literary Heist. Through that connection, an invitation to write about writing groups came about.

(P.S. This article has been read and improved on by members of my writing groups.)