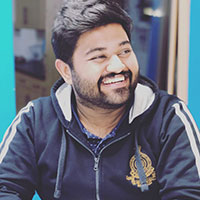 Ashish is an international student (from India), currently enrolled under an M.Phil. programme in English Literature at Swansea University (Wales, U.K.). Before this, he had pursued an M.A. in English Literature and Language from the University of Lucknow (India). He calls himself a customized poet and critic: taking up issues central to his life and that around him, including the socio-cultural and natural environment he finds himself surrounded with.

Apart from creativity, he takes delight in theatre, swimming, travelling, and hide-and-seek as his special interests. His poetry has previously appeared in Literary Heist and the Waterfront Newspaper (a student-led production at Swansea University).

“And all the men and women merely players;
They have their exits and their entries,
And one man in his time plays many parts,
His acts being seven ages.”

The inspiration for this retrospective write-up, or whatever you call it, came from a conversation with a friend over my dramatic potentialities on a monotonous Wednesday evening, when everyone else was either cajoling themselves for a lost (sometimes, half- forgotten) yesterday or strutting back and forth to the promises of tomorrow. Even we were not doing anything… extravagant, eye-catching. I was cooking, my friend was exploring the usual opportunities that the internet offers.

Nothing spectacular. It was then, when we began discussing, and, as far as I remember, the conversation was no more than a playful derision on the theater-enthusiast that I often brand myself as. Sometimes, I even boast about it.

Nonetheless, coming back to my reflections, I don’t think Jacques was right, specifically in his constraints about the development of the stages of the human-actor that he, quite comfortably, narrowed-down to seven. My mind tells me that we are constantly in the middle of an act, with our roles constantly undulating: I’m the poet one minute, struggling with the arrangement of the multiple thoughts that I have aspirations to put to words, and I hear a knock on my door, and the role transforms: now I’m a confidant to a restless friend.

The breaking of thought, and the sudden jilt of activity, might come to aficionados of literature as a reminder of Coleridge’s rejection of “Kubla Khan” after an unanticipated arrival of a “person from Porlock.” Keeping this in the present context, the human-actor encounters a number of persons from Porlock who trigger its transition from one role to another. While dressed-up in a role, the human-actor is still acting, it never stops … the act.

The human-actor may move to different stages that are unique to its physiological and socio-psychological dynamics, but while it gets the flavor of a stage, it is still acting, as I said. Each second encapsulates the big act, and the funny part about the acts is that it never tires the actor. The actor doesn’t need a hundred rehearsals before it steps on the stage to either fire or lull the performance. In addition, the human-actor never directs its performance. It is a spontaneous, least-thought of, performance, and this is from where the essence of our constant performances come from.

Cognizance about this would lead the human-actor towards the anagnorisis of its reality, the acts it has performed (or, is performing), the roles it is expected to play (or, has already played), the dialogues it often uses, the many hearts that it is tied up with.

This even leads to the development of the human-actor to a sacrosanct conglomeration of all the individuals it has touched. Its physiology is not its own, but a cluster of pieces, with each piece belonging to respective individuals who it loves. It’s like travelling to unknown, unexplored destinations that are absolutely raw and fresh to be consumed, and once consumed, they latch themselves with the traveler and take the train to the next end. The traveler keeps on moving, and once it stops, it arranges all the pieces (representative of what you already know) and creates the map of its physiology.

So, it’s about creating yourself, your individuality, the self amongst selves, the life-map. The human-actor needs to know this.