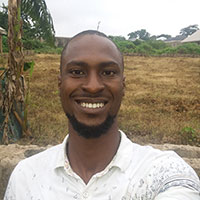 Ode Clement Igoni is a native of Abua in Rivers State, Nigeria. He grew up in Port Harcourt the capital city of Rivers state, he has cited in many interviews that the city had a great influence in his growing years. He is a graduate of Civil Engineering, an Entreprenuer running the activities of a start up company known as Calm Storm. His love for arts was firstly developed by music as he learned to play the drums. He says: “poetry found me and that is the best thing ever.” Ode Clement Igoni has written through different genres ranging from poems to screenplays, essays, stage plays and lots more.

I close my eyes, seeing you all night long
A love we planted now growing strong
We are rising up high never to fall
Deep in sleep, I can still hear your call

A love that has been through the furnace
Burning hot, coming out refined at last
Now we’re having moments of fun blast
We stayed patient and got grace from grass

In this world I am with you and we rule
Our love can’t be broken, they have no clue
Through heavy rainfall, the showers and dew
So many can’t survive, we are the few