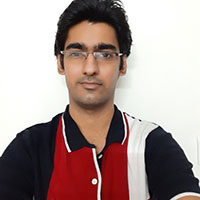 The urge to pee flooded Yash’s senses and cut his sleep. He got up, removed an empty bottle from under the bed, and emptied his bladder. Google had taught him that morning pee is the best source of nitrogen for plants, and there was ample nitrogen coming off his body right now. Perhaps he could ask the Genie to help his plants grow.

Nah. Yash discarded the wish. It was more fun watching them grow.

With the last drops of urine dripped into the bottle, he put it aside, and walked to the plants on the window sill.

A year ago, he had sown the seeds after reading in a magazine that gardening is a good relief from frustration, and his ex-wife used to provide plenty of it. As expected, she hated the pot and threatened to dispose of them the moment he went for work.

One night, Yash was standing next to the pot and admiring the tiny plant when his wife yelled at him for staying awake and disturbing her sleep. Yash tapped a leaf and whispered, “If only I could go back…”

“But you can,” came a soft voice from under the leaf. A pale blue cloud appeared that morphed into a round face. “Is that your first wish, Sir?”

The memory of that day still brought a smile on Yash’s face. He had wished to go back in time so he could stop himself from marrying his wife. Yash’s second wish was for a raise so he could afford a small house near his workplace, without the need for any roommates. The Genie had fulfilled both wishes.

Now Yash caressed the same plant’s leaves on the window sill. The Genie came out from under a leaf and said, “I can transplant them in a bigger pot, Sir.”

“With a snap, I can make you a beautiful garden with roses and lilies. And a lake or a warm water spring.”

“Allow me to complete, Sir, please.” The Genie wiped its tears. “I have spoken with my boss, and he agreed to give you bigger wishes. I can give you a mansion, an entire nation, the college crush who you loved. Anything, Sir. But please ask for the third wish and set me free.”

“I’m sorry. There’s really nothing that I need.”

“How about a wish for others then?”

“There are so many problems in the world. Which one should I solve?”

“World peace? Global warming? The polar bears could use a cooler climate.”

Yash shrugged his shoulders. “I need more time. Sorry.” He left his house, hoping a jog would bring him fresh ideas.

There was a gutter running along the edge of the street. Yash could wish for cleanliness or maybe rid the world of malaria-spreading mosquitoes. Then he remembered his wife’s suffering during her malaria fever. He owed the mosquitoes those two weeks of peace and couldn’t do genocide on them.

Irritated at memories of his ex-wife, Yash headed to the beach and jogged along the shore. It was a small clean beach with just few joggers and some families. He increased his pace, and the adrenaline eliminated the option of wishing for a fitter body.

He grinned thinking that in a world where people cry all the time, he was struggling to wish for one thing.

He returned home and had a bath. Perhaps he could wish for a girlfriend for sex. Maybe he just needed someone to love. Fed up, he went to the window with a towel around his waist. The glass pane reflected his lean body. Cycling is better than asking for abs, he thought.

He flicked a leaf and the Genie appeared again.

“Did you think of something, Sir?”

“It’s okay I understand – what?” The Genie flew to Yash’s face and pulled its ear open to the maximum. “What did you say?”

“Yes!” screamed the Genie and hopped from one leaf to the other. He dived in the soil then flew out. “I’ll finally be free. Hurray!” He climbed up Yash’s chest then sat on his nose. “What’s your third wish, Sir?”

“Yes. A cute cat to play with. Adventurous. Slightly mischievous.”

“Really? A cat? I offer you riches and mansions, and you want a cat!”

“No, no, of course I can. It just feels like a waste of a wish. You can easily get a cat from a pet store.”

“No wait. Don’t change your wish now. I’ll get you a cat. What did you say? A cute cat, adventurous, and slightly mischievous?”

“With a leash. Wouldn’t want to struggle with it later.”

The Genie closed its eyes then mouthed some chant. After a few moments, it gestured toward the bed. A cloud of blue smoke drifted from the Genie’s open hand to the bed, and the smoke faded to reveal a cat sitting on the bed.

“Wow!” Yash joined SliMe on the bed and caressed it. SliMe crawled on Yash’s lap and snuggled to him.

“Thanks.” Yash turned to the window, but the Genie was gone.

That night, Yash slept on the bed with SliMe lying on his chest. The cat looked at Yash and, finding his eyes closed, squeezed itself from under Yash’s arms and went to the window sill. Its plans to escape were marred by the grill. In rage it swiped its paw at the pot that hit the floor.

Pale blue smoke came from under a leaf, and morphed into a cat’s face. The face floated to SliMe and asked, “What are your three wishes, Sir?”

SliMe stared at the cloudy face for some time then bared its teeth, and turned to Yash.