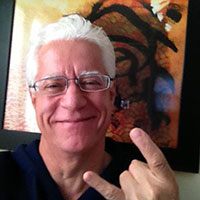 Dan A. Cardoza’s fiction, nonfiction, and poetry have met international acceptance. Most recently his work has been featured in Cabinet of Heed, Cleaver, Entropy, Gravel, Montana Mouthful, New Flash Fiction Review and Spelk.

Laramie was tall for his age, a dark and handsome devil. The right package for all the usual, clichéd scenes, yet Laramie refused to act his part. Most of Lar’s friends and loved ones remember him as ten seconds away from perfect.

At his worse, he was periodically sardonic. But recovering teens will tell you the weight on their shoulders is quite heavy. Lugging a seven year back-pack brim full of angst and testosterone can seem like a lifetime.

Lar was blessed and gifted, hid the fact that he believed in his version of God. God had wings. He was likable, with one of those, “such promising future’s,” that quite frankly doesn’t exist. But before his never tomorrows, Laramie would indeed claim his piece of the heavens, if only in the bluest of California skies.

Laramie had a nasty reputation for being a solid base jumper. Some of his jumps deemed legendary: the Channel 13 Tower, just off Interstate 5, at night. The year before, he jumped El Capitan in late December, high noon. Next was his triple somersault off the Forrest Hill Bridge in Auburn, the highest in California.

Lar’s childhood friend, Hendrix, was his bi-polar opposite, a brother from another mother. He wore a forgettable mask most of the time, with the exception of those alive, piercing blue eyes. If he robbed you at knife point, say at the Sunrise Mall, you’d struggle to remember him in a lineup. Was he short or tall, skinny or thick like an elephant trunk? Most that never knew him associate his name with someone who wore black. The Chute is what Lar called him. Hendrix was Goth. Yes, that Hendrix.

They’d say, “right, I vaguely remember, he was the boy with the sister who liked to cut herself into bits and pieces, each piece a small shard of who she was.”

And with each slice, she was more difficult to find, lived on the streets.

“Yes, the eighteen-year-old Hendrix, the boy who was beaten within an inch of his life for pissing the bed when he was 13, Hendrix, the one whose suicidal mother hated herself and the father he never met.”

Jesus, Kee-Riced. When Hendrix slipped the rail, he’d morph into this gigantic, prehistoric bird. Hendrix lived to fly, and when he did, he was a fucking Argentavis. It was all about swooping, crabbing, and closing the loop. The few that knew him couldn’t tell you if he was sailing to or away from anything, or if he was just off course.

This was HIPAA and the school psychologist’s little secret.

Four years of archived school records in the locked cabinet documented that ever since Hendrix was a child, all he wished was to escape, jump.

First, it was Lagos, and then sisters stuffed animals, a frog, the cat, just about everything went off the roof. There were wings built of canvas and forked branches, with ailerons, elevators, and rudders. Broken ribs and arms wouldn’t define him. Besides, blood and guts in a thesaurus have black, clumsy words for wing bones, too slender and fragile, featherless antonyms and synonyms, created mostly for things of earth, like the remarkable Cassowary.

In high school, acronyms and S.A.T’s, and matriculation didn’t matter much to the boys, though our good looking boy’s scores flew off the charts. “Such wasted promise,” the teachers would say, “So much potential.”

With these two, it was all about altitude, wind speed, risers, and stuck landings. They calculated a good weekend in the metrics of lift, numbers of six-pack, and the essence of heaven derived in the calculus of the number of floors and stories. They made history, jumping the Giza Pyramid Building in San Francisco, the Gate of Golden Bridges.

That day at Forest Hill belonged only to Hendrix. He was the first to jump and stick his landing.

Yes, the soon to be custodian Hendrix, the divorced, bankrupt, childless, Hendrix. The Hendrix at 31 who gave his younger brother his good kidney––before the X- generation, alcoholic, forty-sum-year-old bled out at the Sacramento County General Hospital, Hendrix, the ever kind best friend who couldn’t drink himself far enough away from the past, Hendrix. The resurrection obsessed Hendrix, the man who couldn’t kick his addiction to pain. The Hendrix whose nightmares looped gif’s of him hastily rigging his pal’s sticky chute cords. Bet you won’t forget what he looks like now at the bottom of a six-foot hole–Hendrix.

E.E.Cummings: “How do you like your blue-eyed boy, Mr. Death?”