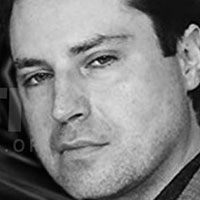 Quentin R. Bufogle is a freelance writer, blogger, novelist & graphic artist. A contributing writer to the former Las Vegas CityLife, his fiction is featured in the award-nominated anthology “Wish You Were Here” (Stephens Press). He is author of the sci-fi Kindle shorts “Silo Girl” & “The Concubine of Mars.”

Fernglow had done it. Or so he claimed. For ten years he’d been holed up in a tiny, cubbyhole of an office in the basement of the Physics Building scrawling impossibly long equations on a chalkboard not quite long enough to accommodate them. Day after day; week after week; month after month … well. You get the picture.

The phone rang shortly after noon in the director’s suite. It was Fernglow on the line. Breathlessly, he informed the director that he’d done it; formulated a mathematical equation that would alter the very course of Western civilization – perhaps Eastern civilization too. More important than E=MC2. More revolutionary than Fermat’s Theorem. Grab your socks and haul it over to the Physics Building – pronto!

With visions of a Nobel Prize dancing in his head, the director did as he was instructed. Though he’d sworn off wearing socks years ago, he grabbed Dean Jones – titular head of the Physics Department – and the two men hurried over to Fernglow’s office. This could be big. Very big! A member of the faculty being awarded a Nobel would be justification for yet another tuition hike. A BIG one. It already cost $1,000,000 a semester to attend the university – not including textbooks – and the only bragging rights trumpeted in the institution’s brochure was an adjunct biology professor who could play Red Sails in the Sunset on a series of specimen jars.

“Do you think he’s really done it?” Dean Jones asked.

“He wouldn’t call us down here in the middle of the day if he hadn’t.” The director offered, eagerly rapping on Fernglow’s door which bore a large “DO NOT DISTURB” sign.

The door creaked open and there Fernglow stood; grinning at the two men through bloodshot eyes.

“Fernglow – is it true? Have you really done it?”

Fernglow smiled and nodded, running his fingers distractedly through his long hermit’s beard. It reminded the director of a National Geographic program he’d once seen on TV about a man who sported a beard comprised entirely of live bumblebees. Guy probably saved a fortune on honey.

Seizing both men by the elbow, Fernglow ushered them over to his chalkboard.

The two men squinted at the board on which a single, albeit brief, equation had been scrawled:

“I’ve used the unimpeachable logic of mathematics to settle the gun debate once and for all.” Fernglow beamed.

“How so?” Asked Dean Jones.

“I’m afraid you’ve lost me. Are you suggesting that getting rid of guns will somehow solve the problem of gun violence? The director scratched his head.

“If there aren’t any guns, it’s impossible to be shot with one.”

“Do away with man’s ability to kill his fellow man by the hundreds in a matter of minutes? Dear God! How will anyone ever feel safe again?”

“I’m afraid I have to agree with the director.” Dean Jones said, “Specious argument. The NRA has done exhaustive studies. Video games, poor parenting, improper breast feeding and plaid leisure suits all contribute to gun violence – but not guns.”

“Of course!” The director chuckled, “Guns are inanimate objects. You can’t blame them for anything.”

“Exactly.” Dean Jones chimed in, “Next you’ll be using your circular logic to convince us that alcoholism is somehow linked to the consumption of alcohol. I’m glad the liquor industry finally put that myth to rest.”

“Purely a matter of semantics.” Said the director.

Fernglow held out a piece of chalk, “The math doesn’t lie gentlemen. Show me the flaw in my equation and I’ll drop the subject altogether.”

“Really, Fernglow.” The director gave him an affectionate clap on the shoulder, “It’s an interesting theory, but just how would you propose to get rid of every gun on the planet?”

“It took me exactly twelve seconds to formulate my equation. I’ve spent the remainder of the past ten years working on this …”

Fernglow removed a tarp from a hulking apparatus situated next to the chalkboard. It looked like an over-sized microwave oven.

“What’s this?” The director asked.

“The Whatchamacallit. Haven’t had time to come up with a name for it yet.” Fernglow’s chest swelled with pride, “Converts any matter placed inside into pure energy.”

“Ya don’t say…” The director said

“Not only will it get rid of all the guns, it’ll solve the problem of climate change as well. No more fossil fuel …”

“Climate change?” The director had to stifle a laugh, “Chinese propaganda! I’ve owned oceanfront property for the past thirty years and I can state unequivocally that there’s been absolutely no change in sea levels whatsoever.”

“The Mojave Desert.” The director motioned to Dean Jones. “Excuse me Fernglow while I have a private word with the dean.”

“We have to stop him!” The director said, drawing the dean aside, “As of the year 2065, gun sales now account for two-thirds of America’s GDP.”

“And the other third?”

“I’ve got it!” The director hooked an arm around Fernglow’s stump of a neck and administered a fatherly pat on the head, “Look Professor, suppose I allow you to present your findings to the entire faculty – one caveat, however.”

“You permit me the opportunity to shoot down your argument – no pun intended. Allow me to prove that a man can be shot dead without a single firearm within a thousand yards of the premises.”

Fernglow and the director sealed their agreement with a handshake. The next evening the entire faculty assembled in the physics lab as agreed. Just as Fernglow stepped up to the chalkboard to present his case, a gunshot rang out shattering a nearby window. Clutching his chest, Fernglow slumped to the floor dead. Calmly removing the chalk from Fernglow’s lifeless hand, the director wrote the following on the chalkboard:

As the crowd hooted and applauded, the director winked at Dean Jones.