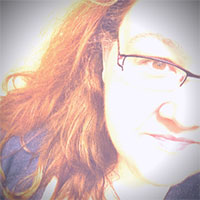 Kayt Ludi is an author of short stories, poetry, a novella, and now the first novel in a new series. Native to California, she now resides with her 5 small, yappy, poorly behaved dogs, in the Arizona high desert; where the site of winter snow on a cactus is not unusual. In her youth she wanted to be an archaeologist but became an English major in college. She enjoys baking, travel, photography, and gardening. Her DVR is full of British detective shows, sharks, ghosts, Stephen Colbert, and Chopped. She is an evangelist for the Oxford comma, admits an addiction to tea, and can successfully write anything except a normal author bio.

“She liked it rough.” he smiled and shrugged. This was probably the 38th time he said it. If they wanted to know the exact number, they could examine the transcript later. But they didn’t really care. The two cops just looked at each other with a shared eye roll. All perps said this, as if they had been given a script, and the cops were hard pressed to bite their tongues for the sake of not making him shut down. The more the perp talks, the better.

“But you did say you had been drinking.” Murphy said.

“So how can you be sure you asked her?” Hayashi asked.

“Or that she said yes?” Murphy added while tapping her stylus on the slumbering tablet in front of her.

“Or that she was sober enough to consent?” Hayashi added in rapid fire while nodding at Murphy who nodded back.

“Sure? You’re sure?” Murphy asked.

“Must have?” Murphy pounced.

“So, you don’t have an independent memory of doing it?” Hayashi zeroed in.

“I wouldn’t have done it without asking.” he insisted.

“Wouldn’t have, or didn’t? Those are two different things.” Murphy shook her head.

“My mama raised me right. You always ask.” he stood firm.

“But did you? Are you sure?” Hayashi insisted.

“Yes.” He said in a confused tone, while setting his jaw.

“But isn’t it possible …” began Murphy, “that maybe she said yes at the start, but then said no later?”

“No, I don’t remember her ever saying no?” he said.

“Don’t remember? So, it’s possible she did?” Murphy asked.

“Maybe after you started to get rough?” Hayashi interrupted.

“You don’t think so? Think or know?” Murphy leaned in.

“And she’s got bruises.” Murphy continued, in a tone which implied the case was closed. “You clearly restrained her.”

“And don’t start with the liking it rough shit.” Hayashi stood up quickly, sending the chair flying back. Hayashi was playing bad cop and therefore leaned across the table to tower over him. “She said no, didn’t she? Maybe not originally, but at some point. And you kept going, didn’t you?”

“I don’t … I wouldn’t … I don’t think I would have ever …” flooded out of him in a flustered stream. Hayashi, pounded the table and walked off to retrieve the chair.

“She says you did.” Murphy shrugged. “You expect me to believe she’s lying? Why would she lie? Why would any woman lie about this?”

“And how can we believe you when you’re so non-committal and unsure with your answers?” Hayashi added from the corner where the chair had landed.

“Plus, he was drunk.” Murphy said to Hayashi. Hayashi nodded and brought the chair back to the table.

“Look, the thing is, women don’t lie about rape.” Hayashi said. “We know that,” adding a circular hand gesture encompassing all three of the people at the table.

“Everyone knows that.” Murphy shrugged.

“I know.” he said. “I know women don’t lie about this, but isn’t it possible there was a misunderstanding? A miscommunication? We both were drinking.” he suggested.

“Ah, but see, the thing is, it’s on you to make sure there’s consent. Not her.” Murphy shrugged again.

“Yeah, this isn’t the dark ages. Those are the rules and the law.” Hayashi pointed out.

“Yeah, you said your mama raised you right, so you know. You’re not a caveman allowed to grab some woman by the hair and drag her off.” Murphy continued.

“We don’t live in tribal packs where you spot some girl across the camp fire and kidnap her to be your bride.” Hayashi added, and Murphy nodded.

“We’ve gotten past all that. We all know the rules. You ask. You ask if they want to go out; you don’t just track their chips and stalk them. You ask for their number, you don’t just scan their barcode while standing behind them on the subway. And you ask before any physical contact beyond a handshake.” Murphy shrugged, and Hayashi nodded. “It’s not quantum physics. And the onus is on you.”

“Look, I think you’re basically a good guy.” Hayashi began. “I mean, I didn’t at the beginning, but I can see now that you didn’t mean to do this.”

“No,” Murphy added. “He just had a bit too much to drink. It happens.”

“Of course.” Hayashi said. Changing her tone to deep sympathy, she added “but it did happen, didn’t it?”

“I really don’t know.” he said as he started to cry.

“But she says she did.” Hayashi said emphatically.

“Then she must have.” he cried and shook his head.

“So, you admit you raped her.” Murphy sought clarification.

“I must have.” his shoulders hunched down as he put his head on his hands on the table and wept.

“You need to read this and sign it.” Murphy passed the tablet toward him. It contained a recording of the entire interrogation and a form which said his name, his identification numbers, and that he was confessing to having committed sexual assault. He sniffled as he signed it.

“I didn’t mean to do it.” he said, hoping for sympathy.

“I doubt that matters to her.” Murphy closed the cover on the tablet.

“On what planet do intentions matter more than actions?” Hayashi shook her head. The two cops got up and left the room.

“I can’t believe he admitted to drinking and thought he could still claim to know he had consent.” Murphy chuckled and shook her head as she poured a cup of coffee in the squad room. Hayashi laughed too.

“I can’t believe he never asked for a male cop to be in the room.” Hayashi added. “Normally, they seem to think they’ll get a sympathetic ear with a man in there.” she shrugged.

“I know. Like a man isn’t going to apply the law as equally as a woman.” Murphy rolled her eyes. “Some days I think I will never understand people.” she sipped her coffee. “I mean, it’s not that fucking complicated. Just ask, and everybody be sober. We’re in the 22nd century for karma’s sake! This isn’t the dark ages anymore.”

“I know.” Hayashi shook her head, pouring her own coffee. “The rules couldn’t be any clearer, thankfully. I mean, even in my great-grandmother’s day it was still nebulous and confusing. Like men thought they had some kind of ESP for knowing if we wanted to be kissed or groped.”

“Yeah, my great-grandma said they used to raise girls to be hyper-vigilant about everything they did, said, and wore so as not to accidentally imply they wanted it.” Murphy shook her head.

“Fucking archaic.” Hayashi shook her head too, trying to wrap it around what Murphy said. “So much better to raise boys to just ask.”

“You know sometimes I like to do those virtual time travel trips.” Murphy admitted. Hayashi looked shocked. “But I had to stop doing all the ones after the invention of patriarchy. Even the ones from like 100 years ago are awful. They’re all either scary or boring and frustrating. I mean, it’s way more fun to spend vacation as a pre-patrihistoric mother and weaver, than some medieval queen at the mercy of men.”

“Yeah, I could never get into those cuz it just seems like it always used to be miserable to be a woman. I even tried one as a man, but my character was a heinous person. He owned serfs, his wife and children were afraid of him, he beat his farm animals. I was like, no thanks. Refund, please.” she put her hand out and chuckled.

“You should try one of the matriarchal ones before you totally write it off.” Murphy suggested.

“I still think this is the best time to be a woman.” Hayashi said.

“Probably.” Murphy shrugged. “I mean, sometimes it’s good for my sense of self to spend time in the past when women were considered superior. I mean, it’s just fun, ya know? But I’m sure it’s better the way it is now. Balance is probably a lot better for everyone than either matriarchy or patriarchy were.”

“According to my great-grandma it’s a billion times better than her grandma’s stories from before the fall of patriarchy.” Hayashi smiled, and Murphy nodded.

“Really makes you wonder how all those generations of women made it through the patriarchy.” Hayashi said as they watched their cuffed perp get dragged through the squad room to his transport.

Murphy shook her head and said, “I can’t stand to think about it.”