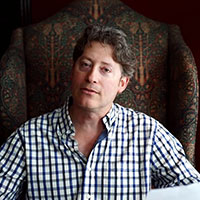 I’m the morning host for NPR station WNIJ in northern Illinois, and the newscaster for NPR stations all the way south to the Kentucky border. My forthcoming novel, Fiona’s Guardians, (forthcoming) is my second book. My first, Shepherd & the Professor, was published by Black Rose Writing on a traditional contract. My short stories appear in Crack the Spine, The Stray Branch, Public House, Aphelion Webzine, and Dark Dossier.

“What do you do for a living?”

The inevitable question after a handshake and exchange of names. I’m tired of confusing strangers, so I rehearsed my answer:

“I’m a literary agent, and before you ask, ‘What’s that?’ allow me to paint a picture. You’re an author. Your spirit animal is a shark swimming in the ocean. Each shark has a remora attached to it. Know what that is?”

“Yes, but a good one,” I continue. “The remora hitches a ride and gets fresh air in its gills. It pays for that ride by eating smaller parasites off the host, as well as loose flakes of skin – all of which slow down a shark when he’s hunting. It’s a mutually beneficial relationship.”

“The bits I eat, that’s my commission.”

The metaphor always crumbles here. “I negotiate publishing contracts, plus contracts for audiobooks, foreign translations, TV and movies. I work to advance an author’s career.”

“Hmm, sharks. Odd choice for a spirit animal. Writers make poor predators, wouldn’t you say? I mean, all they have are words.”

Wow. I’m so flustered I can’t remember how my cleverest author would respond. Failed by nouns, the verb “strangle” nearly hijacks my hands before I rein myself in. Deep breath. Not replying is the preferred tactic in my profession, and I might need this philistine someday. I think he said he was a publicist.

I grab a fresh drink and find a corner to read a manuscript for which I requested substantial revisions. I’ve been agenting ever since a Top Three publisher decided it needed fewer editors and more marketers. Not that a displaced editor like me couldn’t learn to promote books. I’d just insist all the words inside and out be spelled correctly, with proper punctuation. But who wants to listen to a proofreader’s report when the conference desk is full of action figures based on characters from a YA novel? Call me old fashioned. No. Call me a passionate reader who believes a language should have uniform standards when it appears on a page. Or a screen. Or however it’s used – including in an email:

Hey, Phil how goes it? My revised script hit you in the feels yet? I added 10,000 words to get it to 50K, so no longer a novella. A proper novel, like you insisted on.

‘Hit you in the feels?’ Poor guy has no idea what’s about to hit him and his book. I devoted five hours of my life reading it so far. Why did I bring it to this party? Because it rewards every turn of the page. It’s a vampire novel, more gothic than bloody, and gorgeous. Instead of the common crutch of endless description, this author uses dialogue and action to push the plot and reveal character. But even at 50,000 words it’s still too short. Vampires = horror and horror must = 75,000 words. I’m not the one saying that. It’s an arbitrary law based on bullshit research promulgated by a shyster consultant paid by who the fuck knows. This book, like so many others, deserves as many readers as possible. What’s more, the author – like so many others — deserves a healthy advance for his brilliance and effort. Alas, I haven’t the heart to tell him to stuff another 25K words into it. Frustrated, he’ll add modifiers that’ll bloat each sentence, draining power from the nouns and verbs (yeah, like a vampire) and slow plot and character development to a crawl. Can I, in good conscience, take 10% of whatever results from that? I should, with two kids in college and an assistant who hasn’t had a raise in five years. However, I have my principles. Even if self-respect left me long ago.

I got into this business because I loved literature. Fresh out of college, I was one of the first to read The Shipping News. Annie Proulx’s agent pitched my boss, a senior editor named Max, but he was too busy lunching with his colleagues. “Give me a reason to reject this,” Max said going out the door. It was an impossible task. Proulx carried me away with her Newfoundland scenes and characters, plus that lovely rope knot imagery. She needed a champion, and I was determined to be that for her. Going against orders, I placed the book in Max’s “Read pile” and waited. And waited. I barely slept as I dreamed about the book launch and what I’d say to Proulx when I met her. Weeks later, when Max told me he rejected it, I collapsed on the carpet in front of him and vomited all over myself.

When Scribner’s bought The Shipping News, Max just shrugged. In 1993, when it won the National Book Award, Max still had his job. The following year it won a Pulitzer and Max continued enjoying three-martini lunches. Last I heard, he was head of marketing at one of the Big Three but about to retire. “Nobody reads anymore,” he opined to an industry blog. “The days of the big deals ended long ago.”

Max went on, lamenting the decline of “our beloved business of words.” In a final twist of the knife, as if he knew I was reading, he lamented how Hollywood always ruins a good book and specifically mentioned Proulx’s novel.

I was in a crowded café when I shouted, “you should’ve listened to that kid who barfed in your office.” None of the patrons – all industry people – turned their heads, which made me wonder: did Max know all along what was coming? In the 1980s, he was a junior editor at Macmillan when they merged with Scribner’s. Large retailers were taking a bigger share of profits, so publishers were under pressure. Then he moved to Simon & Schuster which, soon after, bought Scriber’s/Macmillan. More mergers followed in the wake of Amazon’s rise, but a surprising number of employees, including Max, kept their jobs. How did the companies stay afloat? By releasing fewer titles. A consultant told them to do that, too.

Nobody consulted the agents, of course. Had anyone cared, I would’ve warned that fewer books means fewer opportunities for authors. But the business model was always hostile to writers, which is why I’m rehearsing again as I stare at that email, trying not to spill cheap wine on the manuscript. I’ll tell him New York is full of philistines and they’ll never understand his brilliance. “Pitch a respectable indie,” I’ll say, “one that has the resources to give you a good edit.” The marketing will be his responsibility, and he’ll get no advance. “But they’ll pay decent royalties,” I’ll say knowing full well he can’t survive on them. I could be brutal and tell him the truth, but I suppose he’s better off discovering it on his own: everyone in the ocean – including remoras like me – are about to perish because the people in charge have poisoned the water.

Perhaps the sharks, those magnificent creatures inspiring and enriching to us all, will adapt and keep surviving. If they do, I hope one of them writes a book and sends it to me. I don’t want to negotiate another deal. I just want to read, discover how they struggled against all odds, and marvel at the words they use to describe their triumph. Please, writer I’m about to reject, make me believe there’s still a reason for a book to exist.

One thought on “Who Killed Publishing”