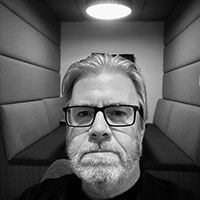 Edward L. Canavan is an American poet whose work has most recently been published in The Opiate, Harbinger Asylum, and The Nervous Breakdown. His first poetry collection entitled “Wreck Collection” was released by Cyberwit Press in March 2019. Edward’s poems were featured as part of The Poetry of Place exhibit at South Pasadena City Hall Gallery in March 2020. He is a native of the Bronx, NY and currently resides in North Hollywood, California.

temples and fragments
strewn about the clouds

here in the warmth of dream
the day begins

unwrapped in a small hour
of suffering and surrender

overcome by a gentle urgency
heavy on the eyes

head down
in the sunlight
of this empty room.