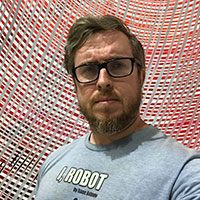 The museum label said it was one of only seven child sarcophagi from that period left in the world.

The ancient Egyptian relic was disconcertingly small, ornately embellished, and faded yet still shimmery under an opaque panel of display glass. There was a little kid in there who otherwise would have long ago decomposed into bones, and those bones would have long ago abraded into powder and disintegrated into a musty nothingness, an ethereal waft of stale air, had his parents not happened to be affluent and splurged on mummification and a hand-carved sarcophagus for their deceased child, a real rarity at the time.

Nelms teared up a little.

His head roiled with visions of a glistening coffin being lowered into the neatly rectangular earthern maw at Arlington, the geometric grid of anonymous white marble tombstones, and battlefield crosses with dusted boots and helmets still pungent with sweat. The freighted silence of a last roll call ceremony echoed in his skull.

Many years later, he could hear the deafening blast, remember staggering around in the smoke and concussive silence, awash in confusion and faint tintinnabulation. Then Spc. Nelms meandered through the ringing and carnage in search of any survivors in need of medical attention. He later wished he could have taken Brillo Pads and scrubbed out the irises of his eyes, blotted out his pupils and erased all that had passed through those apertures.

“There are so many more child coffins,” he whispered to himself as his eyes welled with saline moistness. “So many more.”

Nelms lurched over the gilded display, his mind transported back to that suicide bombing by a turncoat Iraqi policeman his unit had trained more than a decade ago. A granular fog of smoke hung over everything in the chow hall after the ear-rupturing blast. An unseen voice plaintively called out for a medic, again and again and again.

“Let’s get out of here…. the spaceship. We should go see the spaceship. They have a decommissioned NASA space shuttle we should see before this place closes in like… 18 minutes or so now. It’s what everybody comes here to see. We wouldn’t want to miss it.”

Dave gently placed his hand on Nelms’s shoulder blade and guided him out into the vast hallway, lined with glass cases stuffed with specimens and gaudy, information-dense exhibits.

Nelms had rarely returned home to Southern California since shipping off for basic training. Dave told him so much had changed and offered to give him the full tour, but they ended up mainly schlepping from one museum to the next as they reconnected.

He made it away from the child’s sarcophagus relatively unscathed though it brought back an image of a pale, lifeless, blood-speckled Iraqi kid who had urgently pleaded for chocolate while Nelms’s unit was out on patrol just a month before, drawing out every syllable of the word as if savoring a decadent desert in Europe. It made Nelms envision that cafeteria worker whose lungs were punctured by shrapnel, who wheezed in her death rattle for breath that never came.

After he had time to stew in the memories as they grabbed Korean fusion tacos at a food truck, sadness consumed him fully once they entered the Museum of Jurassic Technology in Culver City, a cabinet of curiosity known for its offbeat weirdness. The musty wunderkammer in an anonymous strip mall was a dark, eldritch labyrinth where pathways unfurled confusingly. The floor plan made little sense, and the floor shifted underneath, wood panels heaving and moaning. And it was all creepy, whether the displays of pronged ants, squirrels screaming agonizingly like people being tortured, or dead mice on toast presented as a putative folk remedy.

The man at the reception desk promised them cookies in a tea room on the second floor.

“Well, then you’ve come to the right place,” the receptionist dead-panned.

Darkness enveloped the cramped, claustrophobic warren of bizarre oddities both fantastical and so mundane that they took a second to register, such as a magnifying glass crushing a petri dish, with the label “this exhibit temporarily out of commission.” Disoriented in the gloom, he almost expected someone to pop out of the sepulchral shadows as in a haunted house.

The murkiness was so all-consuming it was hard to decipher some of the captions, and that appeared to be intentional. He meandered through the maze, fascinated by otherworldly accounts of polymaths, canine cosmonauts and microminiature sculptures that fit on the head of a needle.

In a slightly less dimly lit area, he was drawn to an elaborate bench as his legs were sore and the soles of his feet needled with pain. He settled in to rest and went ahead and pressed the beckoning button for a video presentation, which slowly unfurled, almost painstakingly at first. A narrator intoned the tale of Geoffey Sonnabend, a philosopher who posited that memory is an illusion: “we, amnesiacs all, condemned to live in an eternally fleeting present, have created the most elaborate of human constructions, memory, to buffer ourselves against the intolerable knowledge of the irreversible passage of time and the irretrievability of its moments and events.”

Nelms perked up at the idea of an irretrievable past, of moments forever lost to time.

The film went on to explain that Sonnabend’s landmark three-part theoretical work Obliscence: Theories of Forgetting and the Problem of Matter, now out of print and largely forgotten, contends that what we think of as memory is in fact experience slowly decaying.

Nelms watched geometric illustrations diagramming a “cone of obliscence” passing through a “plane of experience,” and wished all his wartime experience would just decompose, pass right through the horizontal plane depicted so reverently and degrade into a wispy nothingness. Let it all rot. Let every perception decay, like a child corpse was supposed to if it weren’t wrapped in linens and meticulously mummified. Nelms wished what he saw, those persistent visions of the blood-flecked kid and the gasping cafeteria worker that dogged him well into the ash end of whiskey-soaked nights, would just dissipate away.

The narrator prattled on in increasingly theoretical terms as Nelms’s gaze wandered from the screen into the darkened crevasses of the gallery space. Would that memory were just a mere construct, he thought.

He pined for this obliscence, to be an unencumbered amnesiac who could escape the long reach of what he witnessed, to forget so he could flow through a fleeting series of moments in the present, as free as a melted snowpack cascading over a cliff’s edge. He longed to live like a waterfall off a cloud-kissed mountain, heedlessly pressing forward, rushing away from any remembrance of that ghastly war that had long ago left him behind, left him with so few illusions and so many regrets.